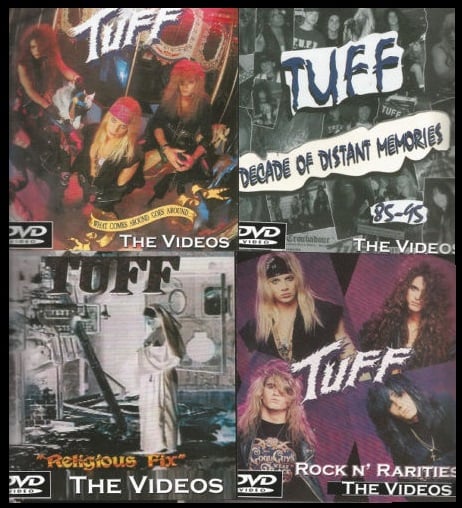 See my message to YOU below.

Hello, this listing is for the TUFF DVD set of 4 home DVDs and the details of what is on each. It's a steal at this price. You get ALL 4 DVDs, All mint, factory replicated DVD-Insert, full color and signed to YOU!

1st DVD In 1991 we released "What Comes Around Goes Around" the CD. And filmed 2 videos for MTV, and a few others on our own. This DVD has our MTV#3 video on it for "I Hate Kissing You Goodbye" along with our Headbangers Ball "style" video for "All New Generation". Also our videos for "So Many Seasons" "Lonely Lucy" "Spit Like This" & "Ruck A Pit Bridge" and an old classic "Down On Sinner Street" with super old footage from 1987. But the best part is the behind the scenes footage of us making "What Comes Around..." in studio, back stage, in the bus, the van and the Ryder truck. Tons of cool stuff. A factory pressed DVD and factory printed full color insert and it's 60 Minutes long.

2nd DVD Our follow up release to our debut was "Religious Fix" in 1995. We also filmed 3 videos for this release. "Tied To The Bells", "In Dogs We Trust" and "Better off Dead". All of these videos are on this DVD, and like GNR's "Making F$%king Videos" we did a similar DVD. We show you how we made these videos, Behind the scenes, on the set and more. This DVD also has a MENU for selection, factory replicated and a factory printed full color insert as well. Running time, 60 minutes.

3rd DVD Following the end of the band, we released "Decade of Disrespect 1985-1995" in early 1996. This also included the home video (DVD) called "Decade of Distant Memories 1985-1995". This is a full 2 hours of killer stuff from the early years in Hollywood, up til the last shows on tour in the fall of 1995. This DVD has a awesome selection of stuff including videos for "I Like What I see" & "Makes Me Sick". Also videos for live songs from the tours, but the footage is edited, so it's not just a straight live take. The live edited video clips are for "All New Generation" "Tied to the Bells" "God Bless This Mess" "In Dogs We Trust" & "Spit Like This".

4th DVD Lastly we have "Rock N' Rarities" This DVD has 27 different LIVE performances from 1987 thru 1995. Songs played at world famous clubs in Hollywood like "Whisky" "Gazzarri's" & "Troubadour" also the "Country Club" in Reseda, add to this select songs filmed at shows in Ohio, Minnesota, Wisconsin, Colorado, Michigan & Indiana. This is a factory replicated DVD, with a full menu, and comes with a factory printed full color insert. Running time 90 minutes.

All of these DVDs are factory replicated, with full menu's for selection on the DVD. Also each come with a factory printed Full Color Insert.
And ALL will be signed to YOU, by Stevie Rachelle, unless you want a different name than what is on the invoice/order, please let me know and I will sign accordingly.